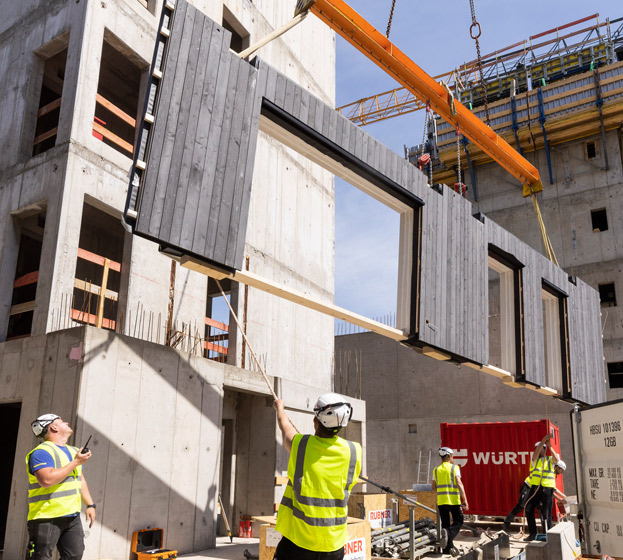 HafenCity, Hamburg, 16 May 2022 - At Baakenhafen harbour, the team of Garbe Immobilien-Projekte celebrated another milestone in the "Roots" construction project - currently Germany's tallest timber high-rise under construction: Last week, leading timber construction expert Rubner Holzbau delivered the first modular timber elements for the property, which were prefabricated with millimetre precision in the factory. Over the next few days, the team will assemble the eight modular wall and ceiling elements of the timber-framed building on site. By the summer of 2023, the 65-metre-high wooden residential tower will be built from around 1,200 wooden construction elements. The completion of the "Roots", which was designed by the Hamburg architectural firm Störmer Murphy and Partners, is planned for 2024. 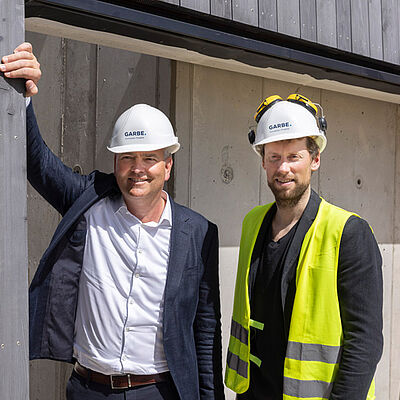 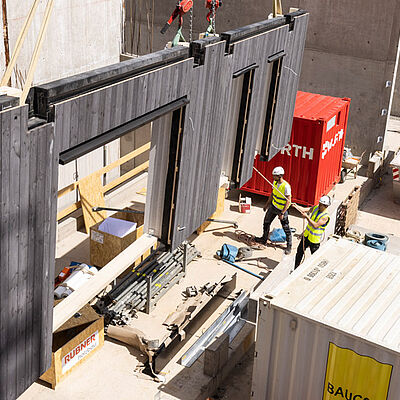 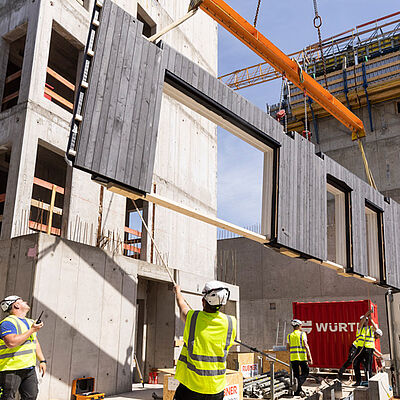 "In contrast to the classic construction method, the use of modular elements with a high degree of prefabrication allows us more precision, speed and a quieter construction site. With our decision to increasingly use wood as a building material, we are taking an unconventional path that nevertheless protects the climate and resources, as well as promising a long service life," explains Benedict Pielmeier, Project Manager Garbe Immobilien-Projekte GmbH, and adds: "We are very pleased to have found a strong partner in Rubner Holzbau, who is taking this step together with us and are proud that the first element has now been successfully assembled." Before the eyes of the responsible project managers, a crane almost 80 metres high lifted the first element, a façade element measuring 10.3 metres by 2.60 metres and weighing 2.6 tonnes, into position. It is one of a total of 400 timber construction elements of the timber-framed building. The façade elements that are still to follow are almost all already installed and assembled with windows and also loggias. The modular timber elements for the tower will also remain in the familiar natural wood look, without pre-greying - the glass façade provided for in the planning will protect the building material in the long term. All wall and ceiling elements are of different sizes and weights. The heaviest element, weighing around eight tonnes, measures between 13 and 14 metres in length. "Building with wood creates a "second forest" of houses in our towns and villages, in which carbon remains locked up for decades, while new raw material grows again in the real forest and actively binds CO2," says Lucas Theis, project manager Rubner Holzbau, and explains: "The building material is PEFC certified and comes largely from one of the most densely forested regions in Europe, Styria in Austria, equally the location of our sawmill."

In total, the 19-storey wooden high-rise "Roots" uses around 5,500 m³ of softwood for the construction, plus façades, windows and coverings. Spruce is primarily used for the load-bearing walls of the timber tower, with small amounts of pine, fir and beech. The ceiling elements made of cross laminated timber, with dimensions of 24-28 cm, are also primarily made of spruce, with small proportions of pine and fir. "In order to create affordable and resource-saving living and working space that offers quality of life for present and future generations, we think construction further ahead: with around 80 employees, we pursue the mission of climate-neutral redensification of our cities every day, which takes on symbolic character with the first assembly of the wooden elements at our lighthouse project Roots. What is still the exception today could perhaps be the standard in a few years' time," explains Fabian von Köppen, Managing Director of Garbe Immobilien-Projekte GmbH. On a gross floor area of around 20,600 m², 181 residential units are being built in Roots, 128 of which are condominiums in the 65-metre-high residential tower as well as 53 publicly subsidised flats. The investment volume amounts to 140 million euros. 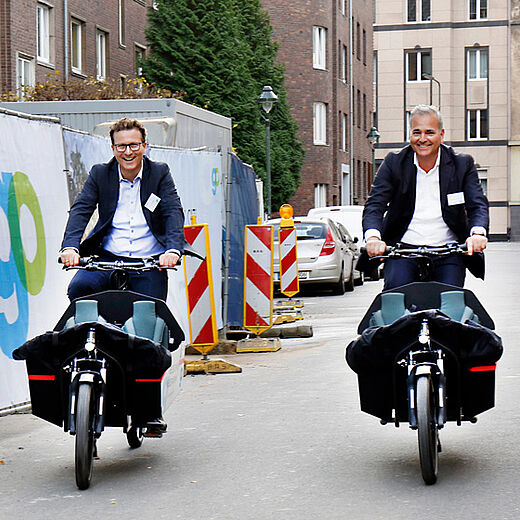 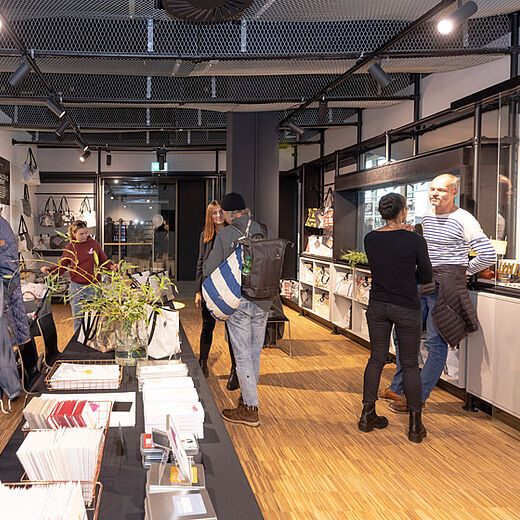 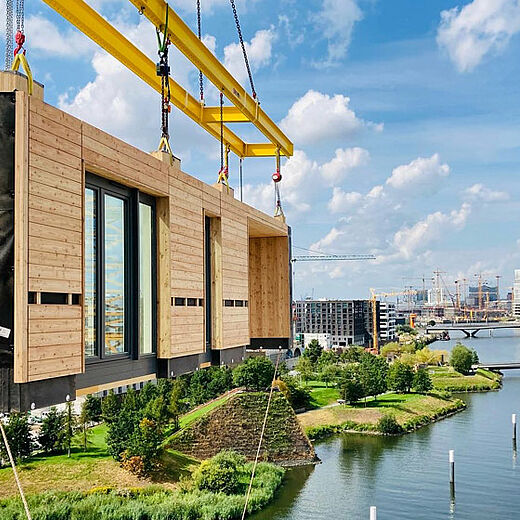 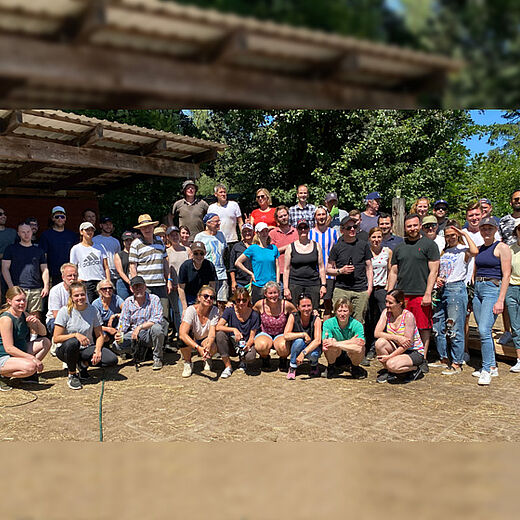 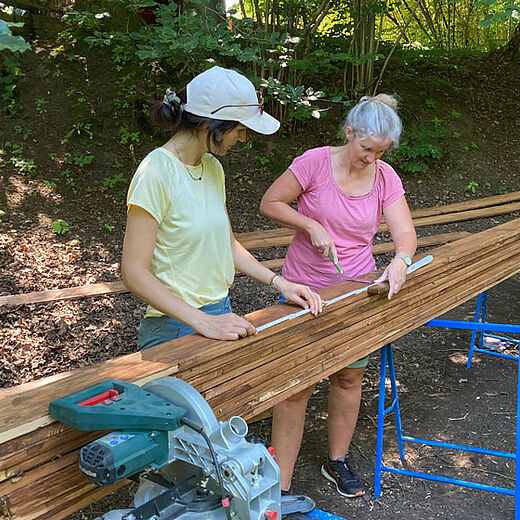 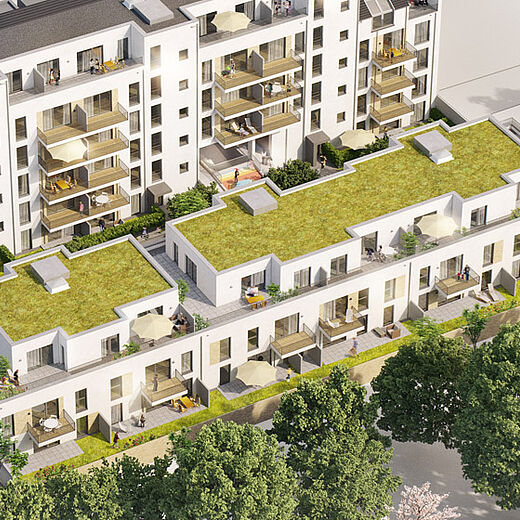 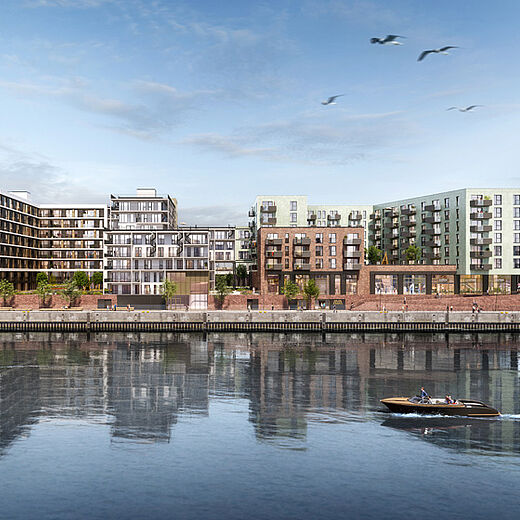 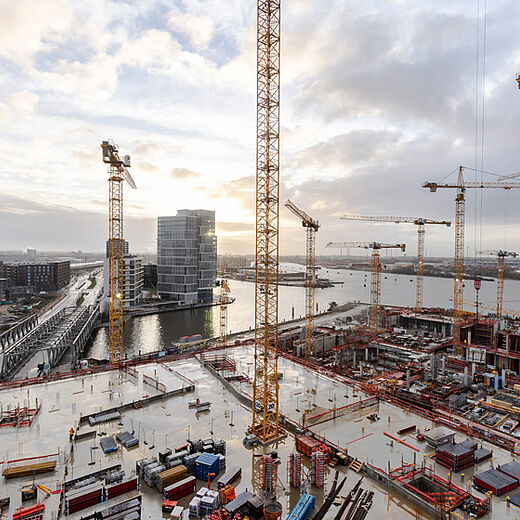 How do you build a pool? 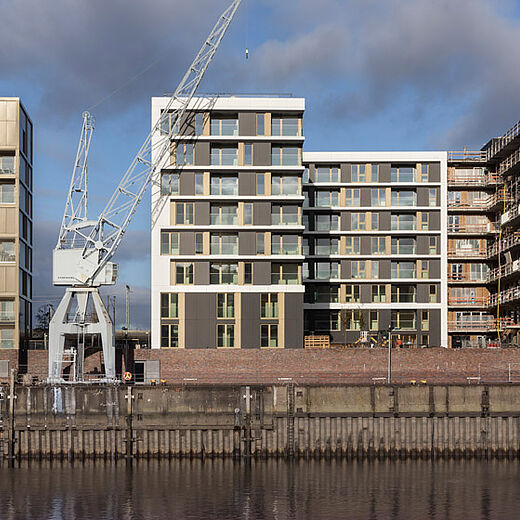